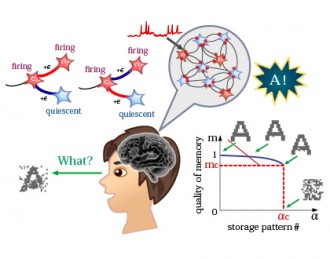 For survival, it is necessary for living organisms to have the capacity to process information. The brain and neural system have developed through evolution as the specialized structures dedicated to such a function.

The principles underlying the very flexible nature of the information processing capacity possessed by the brain are still unclear. Elucidating these principles is regarded as one of the most important research topics of the 21st century. This research is important not only for its engineering applications but also in our quest to understand the nature of human intelligence and “the mind.”

In the classical theory of neural systems, the neuron is modeled as a two-state system, with a neuron either in a firing state or a quiescent state. Within that framework, pattern recognition and associative memory models have been thoroughly studied.

For example, it has been shown that in such models, experience-based learning leads to developments that correspond to the formation of synaptic couplings in actual brains. In this way, the model system stores memories. The capacity to form such memories is referred to as “associative memory,” and with it, such models are capable of recognizing learned patterns. In fact, even in the case that an incomplete form of a memorized pattern is presented, the full pattern can be recalled through this faculty of associative memory. In addition, methods for evaluating the number of memorizable patterns are presently being developed and analyzed on the basis of statistical mechanics.

Despite the success of the classical approach, which considers only the firing rates of neurons, recent results indicate that it is too simplistic. First, there is a great body of evidence obtained from recent physiological experiments suggesting that information is encoded in the correlations of nerve spikes (for example, their degree of synchronization). Also, it has been reported that there are brain waves (electroencephalogram(EEG)) of many frequencies that significantly influence brain function. Thus, it has become evident that elucidating the dynamics of correlations among the spiking activities of large groups of neurons — dynamics that cannot be expressed in terms of a simple ‘firing/non-firing’ type of model — and clarifying the role played by these dynamics in brain function are very important for the purpose of constructing a model of the brain.

With the point of view outlined above, we employ models that are capable of describing this kind of dynamical behavior (for example, the phase oscillator model and the Hodgkin-Huxley model). Using these models, we are carrying out research with the aim of elucidating the information encoded in spatio-temoporal neuron spike patterns and the role of EEGs in brain function.