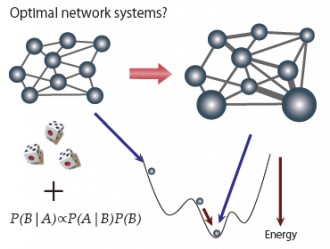 Today, from many types of large-scale, real-world systems that can be regarded as networks of coupled dynamical systems, it is possible to obtain data sets of previously unseen massive scales.

For example, using neurons grown in a culture medium, researchers have gathered firing data over timescales of several months. From such massive data sets, it is possible to acquire an understanding of the growth process of actual neural networks.

As another example, there exist very large amounts of data concerning activity among transportation networks. It is a problem of great practical importance to find ways to extract useful information from such data, and many statistical techniques have been proposed for this purpose.

From a more abstract point of view, we know that in the real world, non-linearity plays important roles in systems of essentially all types. From this non-linearity there emerge myriad properties and functional capabilities characterizing real-world systems. There have been many methods proposed to extend statistical models to non-linear systems. In this context, using the structural stability of dynamical systems as a guiding principle, we aim to construct statistical models consisting of networks of coupled dynamical systems, inferring their properties from experimental data.

In studies of this kind, the main problem is to determine how to efficiently obtain estimates of the very large number of parameters characterizing the systems of interest. Using high-powered computers and modern statistical methods (for example, Bayesian inference and various extended Monte Carlo methods), it is now becoming possible to solve this problem.  For example, determining the coupling strengths in a neural network and the parameters quantifying the firing characteristics of neurons, we can begin to understand the type of principles underlying the high-level functioning of the brain, and perhaps get closer to the secrets it holds.

Finally, it is believed that these same kinds of methods should be useful in the analysis of data obtained from many types of real systems (for example, those composed of large sets of elements exhibiting rhythm phenomena). We are now carrying out research that pursues such ideas.