Research Topics  | The dynamics of pattern formation and ordering processes 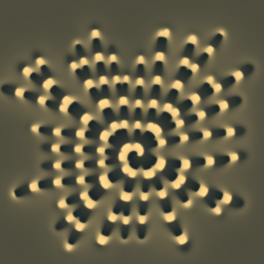 In non-equilibrium physics, there are widely studied phenomena in which order appears from disorder. A typical example is the type of ordering processes that result when a system begins in a disordered, high temperature state, and then is suddenly cooled. There are many other types of pattern formation processes, for example, those exhibited by cellular slime molds.

Cellular slime molds are organisms whose individual cells resemble amoebae. These organisms can undergo a transition through which their mode of existence changes from a collection of individual, independent cells to an aggregate consisting of many cells. They have been widely investigated with morphogenesis models.

In the situation that there is abundant nutritional matter, the individual cells exist separately and independently, but when the nutritional matter becomes scarce, the cells emit a chemical known as cAMP, and this causes a collective chemical oscillatory state. cAMP acts as a chemotactic attractant, and through its influence, an aggregation process begins. The conglomeration of cells that aggregate through this process form a mound-like structure. Once formed, this structure then exhibits migratory behavior. When its migration is completed, the body disperses the spores of the next generation, which subsequently germinate.

In every step of this process, cAMP and the property of chemotaxis play important roles. There is a large and growing body of research on slime molds, with focuses on topics ranging from such molecular-level phenomena as gene expression and protein formation networks to such macroscopic phenomena as morphogenesis induced by the synchronization and chemotaxis arising from cAMP.

In our research group, there are ongoing projects in which we are investigating models of chemotaxis and attempting to understand the morphogenesis process through the analysis of partial differential equations that model the dynamics of the surface of the cell aggregate.